Malatya is one of the major cities in Turkey, located in the Central Eastern Turkey. The city is at a key junction in Turkey’s road and rail network, and is a center of attraction in its region.

Because of its strategic geographical location, Malatya has been a center for civilizations in history. Romans called the city as Melitene. The site of ancient Malatya lies a few kilometers from the modern city in what is now the village of Aslantepe and near the dependant district center of Battalgazi (Byzantine to Ottoman Empire). Present-day Battalgazi was the location of the city of Malatya until the 19th century, when a gradual move of the city to the present third location began. 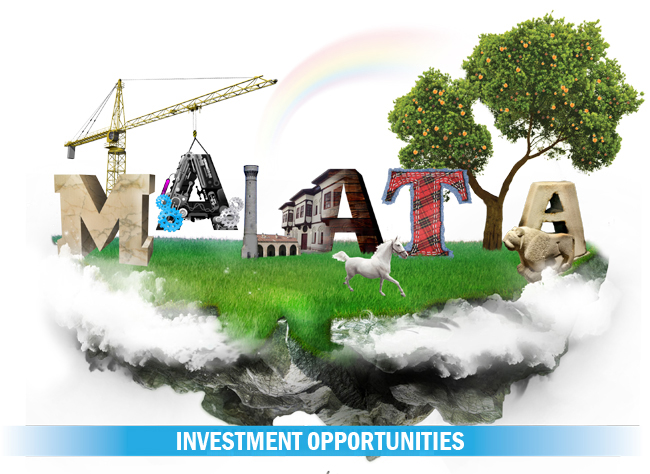 10 Reasons to Invest In Malatya

Malatya province has been a settling area dated back to Neolithic ages, as it has been a strategic geographical location on the way of King’s Road and Silk Road, and owner of rich water resources. Malatya hosted the Hittite, Med, Persian, Roman, Byzantine, Seljuk and Ottoman civilizations, respectively. Aslantepe, that is near the city center of Malatya, known as the oldest city-state in Anatolia, and has been inhabited since the development of agriculture in the Fertile Crescent, nearly 6,000 years ago.

Textile sector, with SMEs and large enterprises inside, composed a big network in Malatya, and this network is developing and expanding more and more. There are lots of enterprises in Malatya operating in spinning, knitting, weaving, finishing, and apparel manufacturing.

Textile and apparel manufacturing sector is the leader in terms of employment in Malatya, as well as in Turkey. 54% of the registered employers are hired in this sector in Malatya. There are some distinguished textile companies in Malatya, with internationally renowned brands

The United Nations and ITKIB Joint Programme entitled, “Harnessing Sustainable Linkages for SMEs in Turkey’s Textile Sector” is decided to be implemented in 4 cities in Turkey, and Malatya, one of the four cities, selected to be the coordination center of the project. 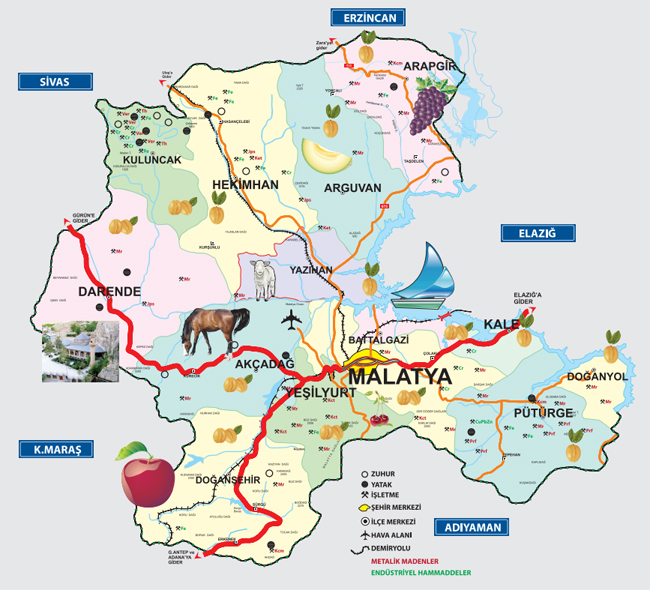 The fertile plain in Malatya is famous for its apricot growing and many delicious products are made from it. This reputation has extended so far beyond the borders of Turkey hence 95% of the output is exported worldwide.

The climate in Malatya region is perfect for apricot growing, as well as various other fruits.

Malatya is one of the best places for stockbreeding investments in Turkey, thanks to appropriate climate and wide meadows.

There are lots of fresh water resources, such as Karakaya Dam Lake, convenient for aquaculture, especially trout cultivation.

In recent years, big investments are being made in Malatya in stockbreeding including both livestock and trout farms, and processing plants. 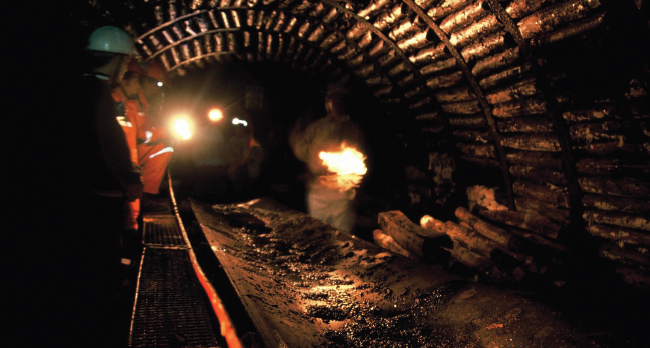 There is also profillit mine reserves in Pütürge-Malatya, and that is a very rarely found important mine reserve, particularly used in earthenware industry. 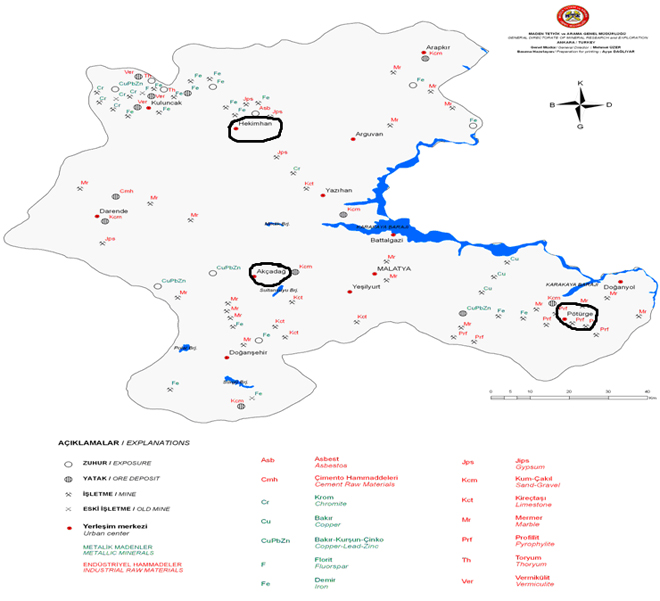 Marble is a flourishing economic value for Akçadağ, Malatya. The most lucrative marble resources of Turkey are at Akçadağ. 57% of the total enterprises and 46% of the total employment in mining sector in Malatya is met marble sector. In order to process around 200 million tons of marble blocks in Malatya-Akçadağ, 1250 acres of area reserved for Specialized OIZ on marbles is being constructed.

Malatya also acts as a medical center of Central and Eastern Anatolia regions with numerous and prominent medical facilities. Turgut Özal Medical Center of Inonü University was founded in 1996, and has 900 beds, 120 intensive care units, and 26 fully equipped surgery rooms. The medical center is capable of performing bone marrow and cornea transplantation operations. It is ranked among the top in Turkey and the world in terms of liver transplantations performed. By adding kidney and heart transplants to its service portfolio, the hospital aims to become a prominent organ transplantation center. With its burn unit and cancer treatment unit that began to function in 2010, the medical center meets all of the important health needs of the region. 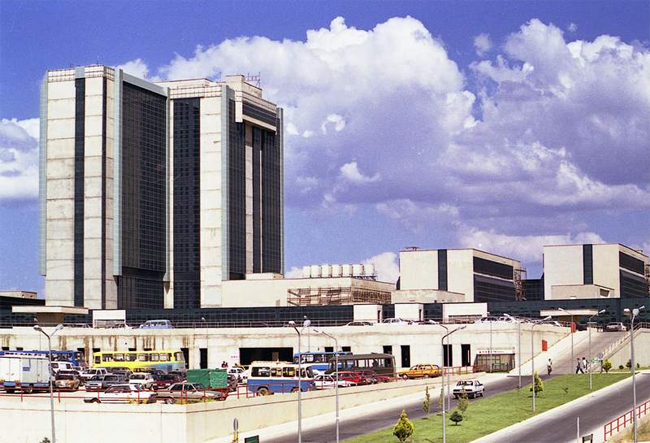 Aslantepe, the oldest city-state in Anatolia

According to historians, first civilization in the region took places in Aslantepe Tumulus – Orduzu town, 6 kilometer distance to downtown. After the excavations, it is discovered that there had been a city-state in Malatya approximately 6000 years ago. The huge statue of the Melita King and lion statues decorating the entrance doors of the palace are now exhibited in Anatolian Civilizations Museum in Ankara. An archeologist from the Italian University of La Sapienza, Rome, have continued her archeological researches and excavations since 1960s, and found several artifacts, exhibited in Malatya Archeological Museum.

Artifacts, exposed by the excavations in Aslantepe, Karakaya Dam Lake and other historical findings are exhibited in Malatya Museum, located in the city center. In the museum, there are artifacts belonging to the Neolithic and Chalcolithic periods, Bronze Age, Hittite, Assyrian, Urartu, Roman, Byzantine, Seljuk and Ottoman periods.

Two historical halls of Beşkonaklar are restored and converted to Malatya Ethnography Museum. Historical tools and traditional clothes give clues about previous cultures of the region to exhibitors.

As stated on the name of Beşkonaklar, means five halls, there are five adjacent historical halls, constructed in the beginning of 1900s, reflecting the style of classical Malatya halls. In addition, 12 historical halls lined up through street. 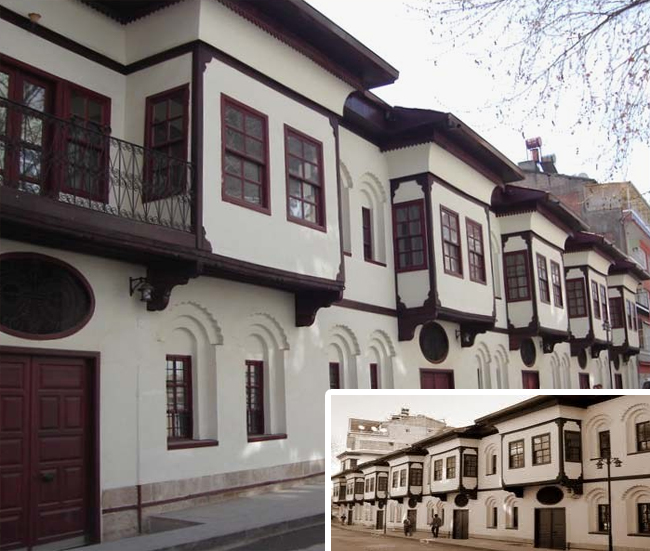 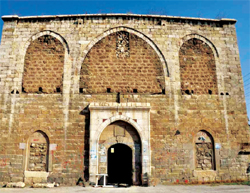 The Armenian Taşhoron church is in the Çavuşoğlu district in Malatya city center, and has a style of 17th century architecture.

Battalgazi, 5 kilometers far from Malatya city center, is often called Eski (Old) Malatya by locals, and there are lots of historical artifacts in the town, especially belonging to Turkish-Islamic period. Battalgazi is like an open-air museum. The White Minaret, Silahtar Mustafa Pasha Caravansary, the Great (Ulu) Mosque, Emir Ömer Mausoleum, and the city walls from Roman period are visited by lots of tourists.

It is constructed by Bosnian Mustafa Pasha in 1637, who is the commander of the guard of Ottoman Sultan Murat the 4th.

Somuncu Baba Mosque is near Tohma Canyon, it is center of belief tourism, and lots of people visit here every year. Besides, the river Tohma is one of the best places for rafting in Turkey.

There is also a wonderful natural waterfall in 5 kilometers west of Darende County, named Günpınar.

The Levent Valley is in Akçadağ County, and has traces from 12 million years ago. It is excellent place for trekking.

Sultansuyu, the home town of the best horses’ husbandry of the country. 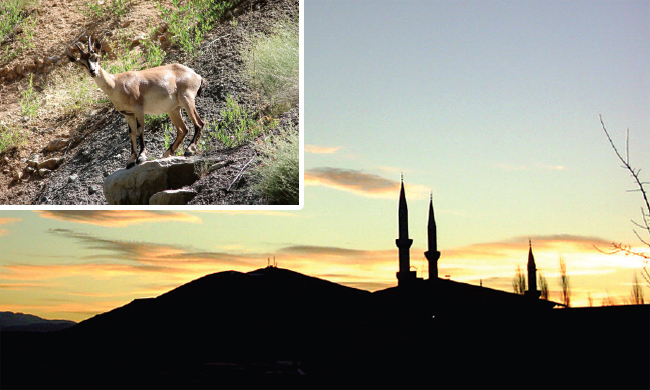 The Nemrut Mountain, which is called the 8th wonder of the world, is between Malatya and Adıyaman provinces, and accessed from Malatya. Lots of tourists from all over the world visit Nemrut Mountain, and watch sunrise and sunset.

Malatya 1st OIZ founded in 1977, and started to serve at 1988 with a 3000 acres of land for factories. 1st OIZ is 5 kilometers west of the city centre, and on the way of both Malatya-Adana, and Malatya-Ankara highways. Furthermore, the OIZ is on the way to the Airport, and the railway passes through the OIZ, too.

By the year 2011, 141 enterprises have production plants at OIZ from various sectors. Textile industry leads the 1st OIZ with 47 production center, and the food sector follows with 40. The capacity of the 1st OIZ is full, so that sometimes called 3rd OIZ is added to 1st OIZ management with 12000 acres of huge land, and land allocation is being done for entrepreneurs. 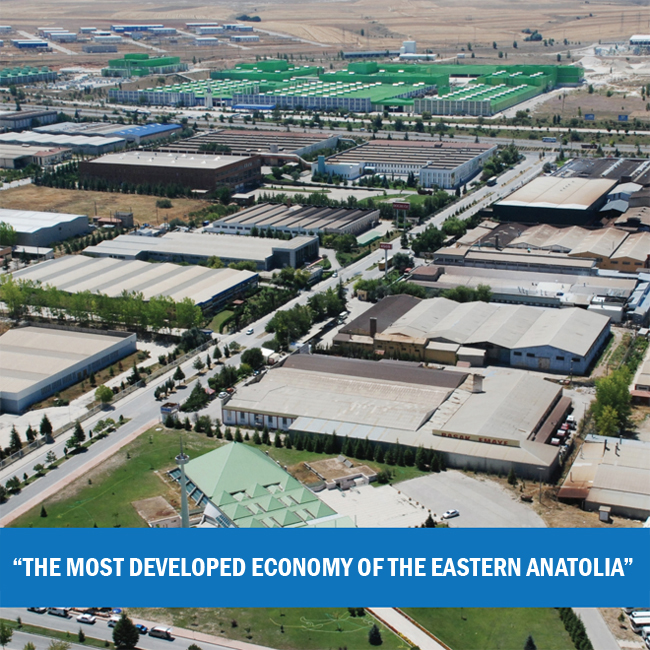 The 2nd OIZ is neighbor of the 1st OIZ, 5 kilometers to the city center, and on the way to the Airport. More than 10.000 people works in the 2nd OIZ.

SECTORAL DISTRIBUTION OF ENTERPRISES OPERATING IN THE 2ND OIZ 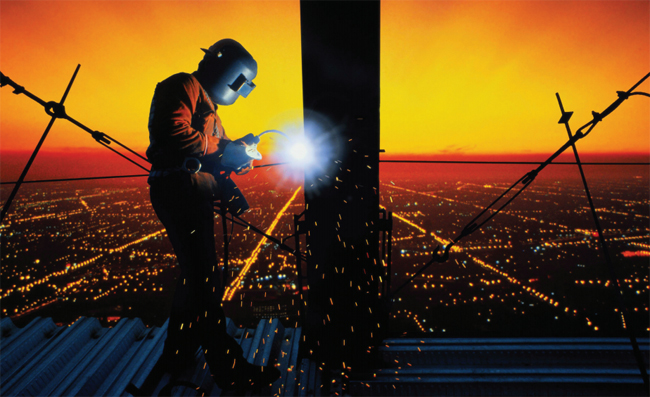 Malatya will be an important center for marble sector in a near future when construction of the Specialized Organized Industrial Zone of Marble completed in Akçadağ, where the most fertile marble resources of Turkey are.

Darende OIZ is still under construction, and in a near future, it will serve for investors.

INCENTIVES FOR INVESTORS AT MALATYA

Malatya is in the IV Regions, which means investments to Malatya mostly benefit from state incentives & supports. 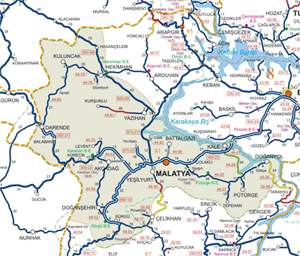 By its relative advance in industrial growth, Malatya is also a pole of attraction for its surrounding regions, in commercial as well as inward immigration terms. The city is at a key junction in Turkey’s road and rail network.

Iskenderun Port of Malatya 318 km, 454 km away and the ports of Mersin port by rail transportation are provided. 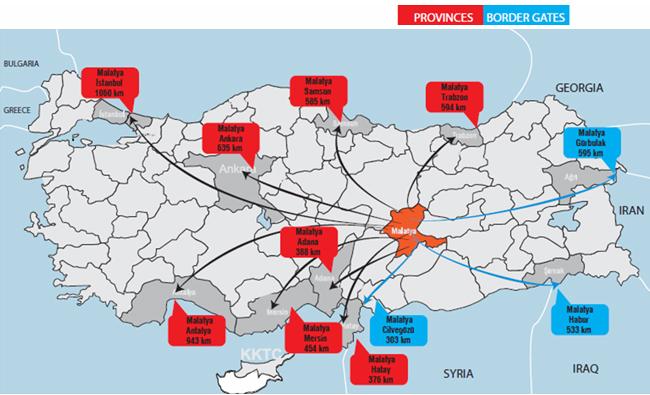 Malatya Erhaç Airport is one of the major airports in Turkey, and has founded in 1941. It is 30 kilometers west of the city center and there are daily domestic flights from Istanbul, Ankara, İzmir and Antalya. Since 2007 there have also been international flights during the summer months. These international flights are especially from German cities to Malatya.

Since its establishment in 1975, İnönü University has been committed to day-to-day improvement and modernization. As a modern and innovative institution, it strives to maintain high academic standards, scientific research, and social-cultural activities.

Believing that a healthy education system depends on the availability of scientific as well as socio-cultural opportunities, Inönü University offers wide-range of opportunities to students and staff on a campus area built on 7000 acres of land with its clean and well-cared surroundings and modern, up-to-date facilities.

In addition to its administrate and academic units, the campus area hosts the Turgut Özal Medical Center, student dormitories, sports facilities, a conference hall, a shopping mall, a student cafeteria, a bookshop, an internet center, a beauty center, a post office, and several bank branches.

Furthermore, 15 universities from Turkey achieved to enter the list of “Best 500 European Universities”, and one of them is İnönü University.

INSTITUTIONS AT MALATYA THOSE ARE IMPORTANT FOR INVESTORS

FDA is founded in 2009 by the Council of Ministers, and serving for TRB1 region at Malatya headquarters.

Malatya Chamber of Commerce and Industry is one of the first chambers in Turkey, and founded in the first years of the young republic.

MTSO is serving for Malatya with more than 7000 members.

The mission of Malatya Chamber of Commerce and Industry is being productive, innovative and competitive. Malatya Chamber of Commerce and Industry organizes periodical seminars and education programs for its members. The chamber, which is one of the leading institutions of the city, guides entrepreneurs and enterprises for investment procedures, investment places, investment capital, capacity reports national incentives and so on.

At Inönü University, Malatya Techno Park is founded in order to develop industry-university collaboration, to produce technological knowledge, to innovate new products and production methods, to improve productivity, to reduce production costs and to ensure SMEs to comply with new and advanced technologies.

Advantages of Techno Park for firms

Malatya has a dynamic social life with 40 libraries, 14 cinema halls, a theater, 5 museums and 651 NGOs.

The city has various shopping centers, shops for local handcrafts and recreational facilities which improve the quality of life. 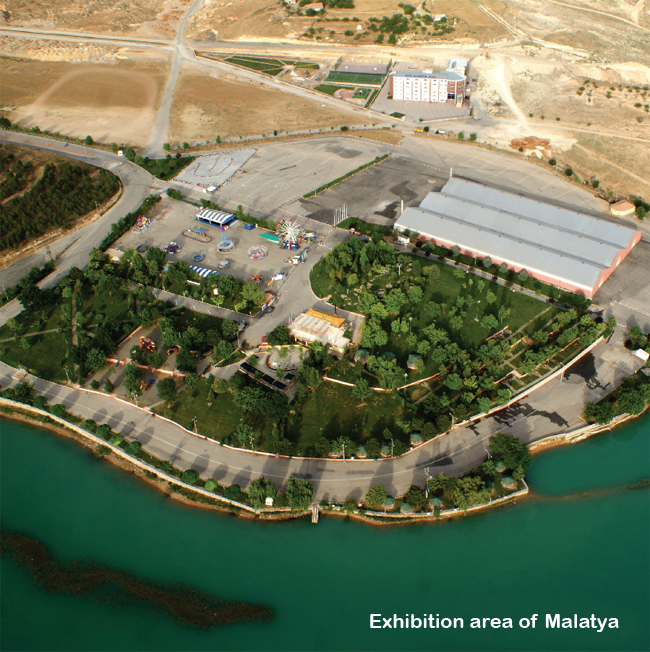 Malatya is a pool of attraction with its rich social and cultural facilities. 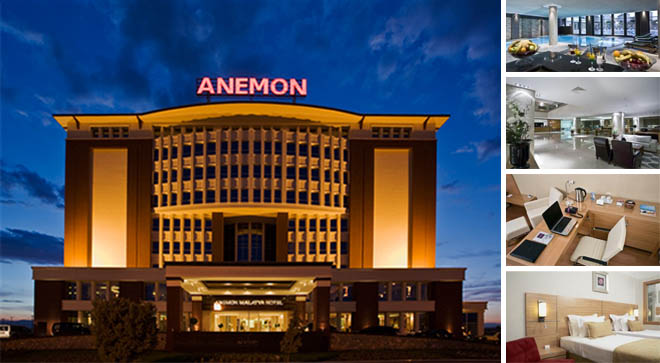